3 Aspects of Leading a Global Team

3 Aspects of Leading a Global Team

In this globalised workforce of multinational corporations, the world’s most prominent companies often pull talent together from across the globe from similar functional areas to work together. Many managers were thrust into the world of virtual teams for the first time during the pandemic but leaders of global teams were already familiar with the many challenges of social distance. They are presented with unique challenges compared to teams that are clustered together in similar time zones, cultures and even physical spaces (offices, remember them?).

In an article for the Harvard Business Review, Professor Tsedal Neeley identifies five components of leading a successful global team: structure, process, language, identity and technology. We examine three of these areas of focus and elucidate how OrgChart can be used to facilitate the effectiveness of international teams.

The advantages of having teams with dispersed members geographically are many. They have a better grasp on their local markets and the resources available to them. They are closer to their end customers and can provide culturally appropriate support. Global teams also bring together specialised expertise and diverse thinking not always possible in any one local setting.

However, there are challenges from this physical separation that can impair international teams. Differences in cultures, time zones and languages can make it difficult for leaders to bond people together in the same way they might with a team that meets physically everyday.

Mary Keane, Director of Technical Program Management at Oracle Corporation said about managing a global team, “I found it helpful to spend two or three minutes at the beginning of each meeting on non-work items such as learning what the upcoming holiday in India/Argentina/Germany/England is about and how it’s celebrated. Or what everyone’s youngest child/nephew/niece is doing for the school break.” She believes extra efforts must be made to connect members of the team when casual social interactions are not possible.

Divisions can sometimes occur if the leader of the team is located close to some of the team (say in a corporate headquarters) who have in-person access to their boss. This may feel isolating to other team members located in other geographies who have to rely on virtual communication to give their input. Experts suggest leaders regularly check-in with remote members of the team, involving them in decisions and soliciting their input, as a way of maintaining a cohesive global team. 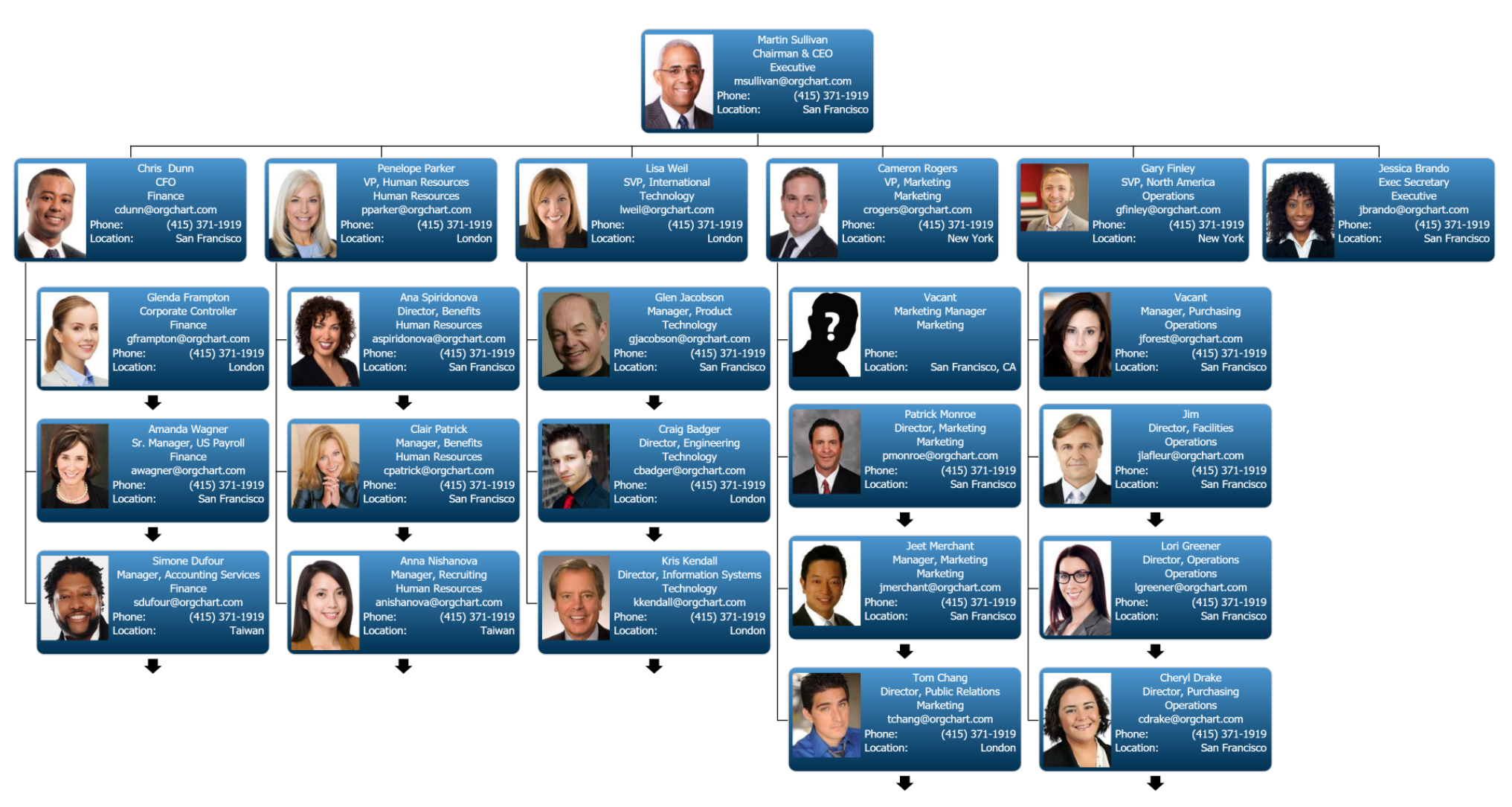 OrgChart can help too by providing a clear, visual representation of the group. This can help team members orient themselves within a project by including their job title and responsibilities alongside their colleagues. It also reinforces the importance of interconnectivity between team members despite their dispersed geographies. By publishing this document on the company’s intranet, leaders can refer the team to it to remind them of their unique and important roles, as well to explain any changes in structure as they arise.

Most international business meetings are held in English. This can create power or contribution imbalances if that is not the native language of certain members of the team. Those who are fluent in English, or the chosen language for the meetings, can exert undue influence on the decisions being made. Leaders can mitigate these imbalances by educating the native speakers on the team to dial down the slang and idioms used and checking in regularly to make sure everyone is being understood. Team members not confident in the chosen language may actively need extra encouragement and space from leadership to make sure their contributions are being voiced.

OfficeWork Software understands the challenges of language and makes its charts easy to toggle the UI between languages so that the structure of the organisation is easily accessible to all. As well as that, numerous overseas offices ensure that local support is on hand to facilitate optimal use of the software.

Leaders must make important decisions on how the team communicates with the technology available to them. For example, video conferencing may break down some barriers of social distancing and enhance personal communication but might be an inconvenient choice when dealing with multiple and opposing time zones. Email might be convenient in terms of being able to make considered responses at the convenience of other members of the team but it lacks immediacy and communications can be misinterpreted without visual cues. Keane also noted the importance of immediacy and availability for team cohesion saying, “the key for me and my international team was being available to my team at their hours. This meant a lot of night and early morning meetings but it made the team much more cohesive.”

OrgChart Now has recently developed and enhanced its collaboration module to facilitate these interactions. Members of global teams can now contribute effectively to workforce planning charts with easy-to-use features. Drag and drop features allow scenario changes in the organszational structure to be modelled in real-time over video conference. If live meetings aren’t possible team members can contribute their ideas by leaving comments and making changes which are both time stamped and identified so confusion during the planning process is minimised.

Leaders must take extra steps in both process and technologies to bridge the gaps of social distance of a global workforce. Contact us for a free demo on our OrgChart Now organizational charting software can be used to support the goals of your global team, or start a free trial today!

This website uses cookies so that we can provide you with the best user experience possible. Cookie information is stored in your browser and performs functions such as recognising you when you return to our website and helping our team to understand which sections of the website you find most interesting and useful.

Strictly Necessary Cookie should be enabled at all times so that we can save your preferences for cookie settings.

If you disable this cookie, we will not be able to save your preferences. This means that every time you visit this website you will need to enable or disable cookies again.

This website uses Google Analytics to collect anonymous information such as the number of visitors to the site, and the most popular pages.

Please enable Strictly Necessary Cookies first so that we can save your preferences!